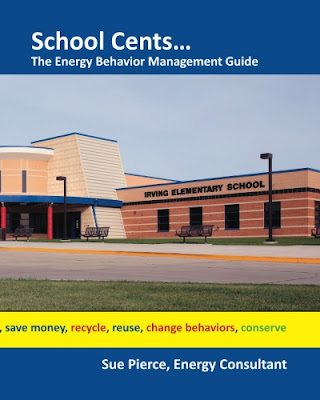 Sue Pierce is an Energy Consultant and an Upward Trend client. Her book, School Cents, The Energy Behavior Management Guide was just published a few weeks ago. I bought a copy for myself and just finished reading it and it is an articulate and easy plan to put any organization where many people are involved in decision making on track to helping their budgets go further.

In chapter one, Sue states, "As a school official, you probably know the annual energy bill to run America's primary and secondary schools is a staggering $6 billion - more than is spent on textbooks and computers combined. What you may not know is that the least efficient schools use three times more energy than the best energy performers and the top energy performing schools cost $.40 per square foot less to operate than the average performers." Just imaging saving 20%, or $1.6 billion . . . or even better, using that money for something more useful.

From the Introduction: "When I first started working with school districts on saving energy, many elected officials and superintendents were skeptical. "We wish you well, but I don't think simple behavior changes will do much." "You thing we can reduce energy use by 10% through behavior changes? No way!"

Twelve months later that District had reduced energy use by 15% across approximately 3,000,000 square feet of building space. Twenty four months later the program had reduced consumption by 26% for an avoided energy cost of over $2,000,000. And yes, now they are believers as are many other school districts I work with!

At a time when money is desperately needed in the classroom, it breaks my heart to see schools ignoring the money that could be saved by changing simple ways of behaving in the buildings. School Cents. . . The Energy Behavior Management Guide is a step by step guide on how to save energy through behavior modification. I have taken the process I have used over and over with great success and documented it here for other school districts to use.

This Guidebook will provide you with the basic tools you need to implement an energy behavior management program in-house with District staff and to keep the energy savings in the District."

For a very small $14.95 investment, we think you will find this book of value for any organization. I might also mention that the book has a lot of places to make notes in and is a larger size (8"x10") to make it easy to write in and have it lay open. Buy your copy here: Pierce Energy Planning Amazon Store
Posted by Terry Minion at 8:52 PM