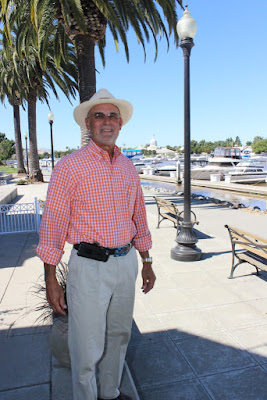 Steve Lessler considers himself a matchmaker of sorts.

As the owner and sole employee of Suisun City’s Business of the Year, The Lessler Group, he spends his days traveling Solano County and connecting like-minded people and organizations with one another.

However, unlike a traditional matchmaker, Lessler’s goal is not a love connection – it’s a business connection.

“The Lessler Group is a business to business matchmaker,” he said. “I advocate and network on behalf of all of my clients while also educating Solano County based businesses that there are first-class service providers here locally that they can use. They do not have to leave the local business community to get all of their needs met. They can find everything they need, right here in Fairfield and Suisun.”

Lessler can often be found taking his clients around Solano County to meet other businesses that could potentially utilize the services they provide. He initiates that connection and then the businesses build the partnerships with one another. It’s a very rewarding opportunity for him, especially when he works with the smaller business owners.

“Truly, the small service providers that are owned by local people are the heart and soul of our business community,” he said. “Larger businesses, like NorthBay Healthcare, are vital to the community as well but statistics show that most people work for small local businesses.

“I have found, by and large, it’s the smaller, independent businesses that do the lion’s share of community work. And no one is telling them to be involved. They are involved because they want to be and they know it’s important.”

The ‘matchmaker’ business has proven to be very successful for Lessler. This last April, The Lessler Group celebrated its 16th anniversary in Suisun City. His first three clients – Kathy Parsons of Credit Bureau Associates, Rosa Phillips of Express Employment Professionals, and Scott Reynolds of Reynolds Law, LLP – continue to utilize his services today.

“I think my clients appreciate my services because I’m effective at getting them in the door, to the decision-makers,” he said. “I know a lot of people in Solano County.”

Just look at his history in Solano County. Lessler moved to Fairfield in 1983 and his first step in community involvement came in 1988 when he served on Fairfield’s Vision 2020 Task Force.

“Through all of my involvement, I’ve developed a wide network of contacts and that became the genesis of The Lessler Group,” he said. “I’m passionate about the local community thriving and unless we create business and employment opportunities here, talent will leave the area and money will leave the area. We need to keep both local.”