Jumbo Prawns Sautéed with Peppers, Garlic and Cherry Tomatos.
Served in a Spicy Tomato Sauce over a Bed of Linguine Pasta.

Join us for some great blues and smooth jazz sounds from Hollywood Jenkins this Sunday, November 11th On The Patio at Fuso's Italian Restaurant from 5:30pm to 8:30pm. 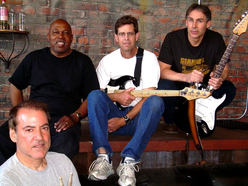 Robert “Hollywood” Jenkins has been well known as a San Francisco Bay area, Guitarist, Vocalist. Hollywood decided that playing music was the coolest thing that you could ever do. He moved to San Diego,Ca and started a band, Hollywood’s band opened for the legendary James Brown at the Convention Center. Thereafter, Hollywood moved to Oakland, California, in 1977, where he landed his first local gig with the Brummels Band. Soon after, Hollywood played as a side man for many musicians like the Monterey Blues Festival with Beverly Stovall, The Oakland Convention Center backing John Lee Hooker and at Yoshi’s Lounge with Ricardo Scales. Additionally, He has performed with Jimmy McCracklin, Kenny Neal, Zakiya Hooker, among others. Hollywood was featured at the KCSM Jazz on the Hill Festival, Polk Street Blues Festival, Guest performer on KGO News Talk Radio 810 AM.

Hollywood’s style has been influenced by many guitarists such as B B King, Albert Collins, Buddy Guy, Wes Montgomery, and Stevie Ray Vaughn. Hollywood was voted “New Blues Artist of 2007“, by the Bay Area Blues Society and most recently played Guitar on Blues Legend’s Jimmy McCracklin’s Recording of “Hey Baby”. Hollywood's own CD: Robert “Hollywood” Jenkins, which airs on KPOO Radio 89.5 FM and KPFA 94.1 FM is available on Itunes, Amazon.com etc. He still believes that performing music is the coolest thing that you could ever do!
Posted by Terry Minion at 7:46 AM