Personal Philosophy & The Idea Of Competition by Terry Minion

Our personal philosophy is but a collection of experience and repetitive thought. It is what we currently believe. It is also our attitude. Our attitude is how we view and respond or react to the world around us. I've always liked the analogy of what an airplane pilot learns. The pilot learns that the airplane's attitude is always relative to the horizon. Level flight is equal to the horizon, whereas, any other position of the plane is something that should be being done on purpose.


Our attitudes are like that as well. If instead of the horizon, we call it feeling good or our natural well-being, then anything other than this is in some manner away from how we truly want to be. You may have even heard people say such things as, "they're in a nose dive," or "they're going to crash and burn if they don't change," or "fly straight and level."


Truly, our attitude is simply how we choose to look at the world or at something, and this determines our response or reaction in every circumstance. The key word here is choose. At any time are choosing to react or respond, to be angry or happy, sad or joyful. Our attitude comes from what we believe and a belief is just a thought that we keep thinking over and over again until it becomes dominant within us.


This means that our personal philosophy, our attitude, and our beliefs can and do change as we learn and grow. Many times people hold onto beliefs and attitudes that no longer serve them--even holding them for many years and causing them to react in a way that causes them pain and is away from their natural well being. 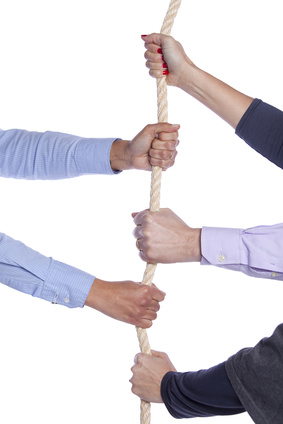 My own personal philosophy has changed in one area that has changed my entire life and that is changing from the idea of competition to one of creating partnerships.


Competition is generally fear. It is a belief that there is scarcity or not enough and we must compete over what exists in order for us to survive, or win whatever it is we are currently competing over. This view of lack permeates our society when if we but look around us in nature, there is such abundance that it is beyond counting.


Consider the air we breathe, the grains of sand, the water on this planet--not only the surface area of it, but the depth of it as well. Consider that there are things in motion that we have nothing whatsoever to do with. For example, we don't make trees grow, or plants, or flowers bloom. The most we can do is tend to them or not. Indeed, there is such abundance when we begin to see abundance that to look at the idea of having to compete for what little there is becomes ridiculous.


Yet, we are taught this idea of lack and the need to compete. We are taught it from birth, and even as we grow and get older it continues. It is something that it appears that the majority of the world believes in. It is on the news, the radio, the television, sports--it is everywhere. Or so it would seem. Truth is that there are many who believe in abundance and have lived their lives that way. It is absolutely a choice.


I spent most of my career in the automobile industry at the dealer level in sales and sales management. In that environment competition is the name of the game; however, instead of competition, I have come to believe more in abundance and one of the ways that I practice this is by partnering instead of competing. I've now been practicing this since the early 1980's. Here are some examples:

See rest of article
Posted by Terry Minion at 9:29 PM